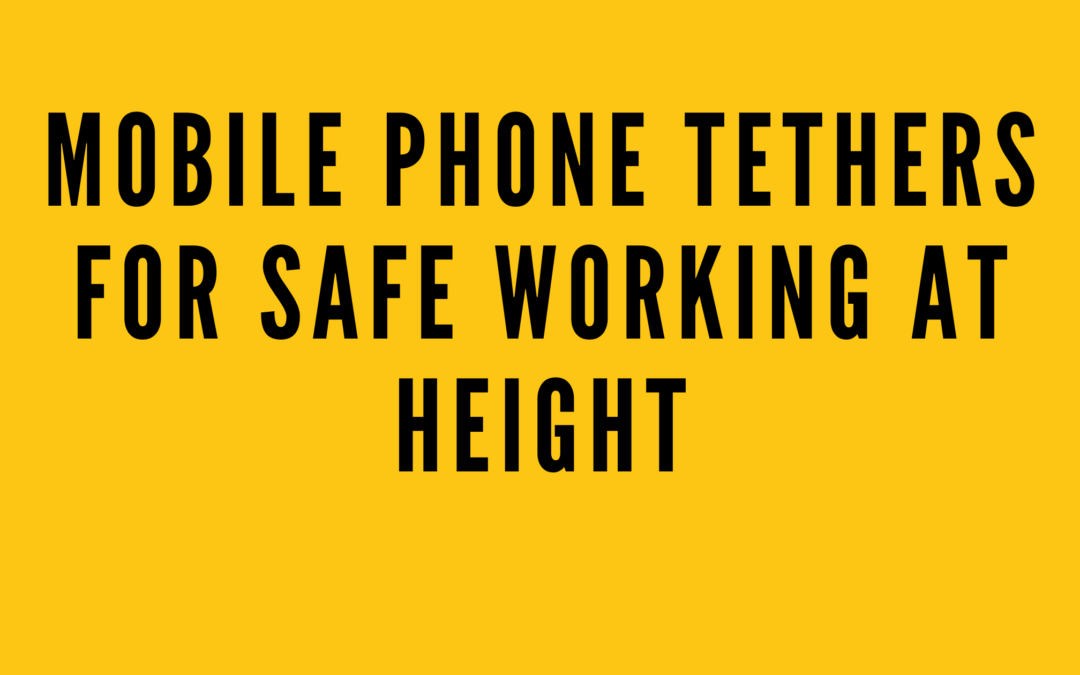 Now you can tether your phone, tablet or mobile device without the need for a permanent or semi-permanent connection point.

Why should you tether your phone when at height?

The sole reason you tether your phone is so you don’t drop it. But why so it so important not to drop your phone when at height?

Firstly we found the that people drop phones a lot more that I thought. According to the poll, the average American polled drops their phone on the ground four times every week. Furthermore, the average weight of a smart phone is 170g.

If this is dropped 10 meters it has 16.66 joules energy at impact, this is the same as a microwave. But then even at 5 meters your phone would have an energy at impact of 8.33 Joules, this is like a 40” television.

So needless to say at that your phone is unlikely to survive. But the thing that could be worse, is if it hit someone.

From those heights, it is not likely to be fatal, but if you go above 10 meters it could be.

What’s the most common way people drop their phone on site?

Now we do know that many of the big sites ban phones. However most people view this to mean not to use  their phone so they carry it around with them and just don’t answer it or use it in front of the supervisor.

As a result we still see phone’s being dropped on these sites as well.

An example of this is that moment when you’re waiting for someone or something so you sit on a ledge and your phone slips from a pocket.

The other way we find phones are dropped is when people are using them to take photos. Often a supervisor will ask you to take a photo of problem.  So you reach out with your phone to get a photo and drop your phone.

What’s the best way to tether your mobile, iPhone or iPad?

What we find to be the best way to tether your phone is with a Phone Gripper as it just folds around your phone, and you can still easily use your phone. It is quick to put on and take off.

So as you walk onto site, you can quickly tether you phone, and the same when you leave.

The second option is to use an e-catch. This is a Heavy-duty sticky pad that you attach to you phone.

This is tested up to ½kg. They work very well and once it’s on your phone it doesn’t need to be replaced.

We normally put this with a tether with a side-release attachment. This means that you can easily clip your lanyard to the E-catch. The small downside to this is that you will always have a small tag on the back of your phone.

One that we have found that doesn’t work very well is the case that you put your phone into.

They are good in a way, as it’s a nice place to store your phone when working. But we find that its hard to use a phone through that plastic front.

So people tend to just take the phone out of the case to use it. Also these don’t always work for larger phones.

According to the poll, the average American polled drops their phones on the ground four times every week.

Now you can tether your phone, or mobile device without the need for a permanent or semi-permanent connection point. Used in conjunction with a load rated tether, the Phone Gripper uses a purpose-built silicon to create a load rated tethering solution with zero impact on device operation.

Traditional mobile device tethering relies on the use of powerful adhesives being applied directly to your mobile device to attach a load rated connection point that damages the devices finish when removed.

11 billion mobile devices in use globally

Experts predict that there are around 11 billion mobile devices in use globally, with the majority of these being smart phones. So given this what is the most common ways people drop their phone on site?

This can range from dropping them as they walk onto a site, to taking photos and slipping it out of a pocket when waiting for someone.

It’s not just drops either; often an object will slip off the edge you are working near or something else could knock your phone over the edge.

Popular with construction and manufacturing industries

Now you can tether your mobile device! Mobile devices are a growing threat in many industries, including construction and manufacturing. Mobile Devices are often used at height or close to dangerous machinery due to their convenience and functionality.

Traditional means for securing these devices have ranged from using heavy duty Velcro straps that attach directly onto the device (damaging its finish) to cases with pockets; which require removing them each time they need to be used-not practical if working at heights where gloves may not always be worn over hands.

The GRIPPS Phone & Tablet Gripper has been designed as an alternative solution for secure yet convenient attachment/removal of tethered equipment on site without damaging cables or connectors.

The GRIPPS Mobile Device Gripper is a non-adhesive, load rated tethering solution for Smartphones and Tablets.

At the heart of this device is silicon that creates an effective hold in soft materials such as clothing or gloves without damaging your devices finish with traditional adhesives.

The Phone & Tablet grip provides secure attachment to Mobile Devices while allowing unrestricted use when not being used at height. It’s also durable; able to withstand repeated abuse from drops and falls onto flat surfaces where it can be picked up and reused again!